Formation of South Sound 911’s regional radio system is underway and is already providing improved, interoperable communications between dispatchers and law enforcement, fire and medical responders. The radio system is designed to work seamlessly in both metro and rural areas to ensure the elimination of communication barriers between public safety agencies throughout the county.

The local 911 radio system was once comprised of six different radio systems. The 911 centers and the agencies they served operated independently — so much so that even when responding to the same emergency, law enforcement, fire and medical responders could not communicate by radio without “patching” the systems together, a manual process performed by a dispatcher. Such communication barriers are common across the country, but often only come to light after tragedies or natural disasters.

In November 2011, residents of Pierce County voted for a 0.1 percent sales tax increase to support and improve public safety. As a result, six 911 centers are consolidating or collocating under South Sound 911 and an integrated, reliable radio system is being built.

The plan for the regional radio network consisted of two projects for two frequencies — 700 MHz and 800 MHz — and each frequency will be used in the regional network in a “single system” that includes VHF. 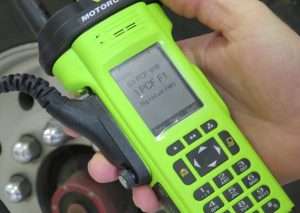 Portable radios for fire responders are rugged and highly visible.

Since local public safety agencies may use different or multiple frequencies depending on their jurisdiction’s geography and terrain, the regional radio system is designed to work seamlessly in both rural and metro areas. Additionally, the integration of multiple frequencies will provide opportunities for further interoperability with neighboring jurisdictions.

Now that the separate 700 MHz and 800 MHz projects are complete, South Sound 911 is working with Motorola to create a “single system equivalent” to make it easier for responders to switch frequencies when moving about the county and assisting other public safety agencies.

Responders will be able to activate an emergency button to open communication to dispatch and send GPS location data.

What all of this work comes down to is safety. Seamless, reliable lines of communication between first responders will allow for faster response efforts between dispatchers, law enforcement, and fire and medical responders — all of which facilitate getting emergency aid to where it is needed.

The new mobile and ruggedized portable radios provide a host of upgraded and essential features making them vastly superior to the outdated radios being replaced. For instance, the new radios will allow first responders to roam between jurisdictions, can provide dispatchers with GPS location data if a responder triggers an emergency button, and offers noise-cancellation for improved audio communication.

But, the regional radio network is more than new radios and towers. South Sound 911 was created thanks to the community’s support and the community’s desire for efficiencies in public safety. This collaborative effort and partnership in pursuing improved emergency communications is not only ground-breaking in the public safety industry, but is key to South Sound 911’s mission and vision.

In 2016, nearly all public safety responders served by South Sound 911 were using the new digital trunked radio systems (700 MHz and 800 MHz) as their primary method of emergency communication. Approximately 4,591 South Sound 911-funded new public safety radios have been deployed to operate on these new systems. South Sound 911 also partnered with Pierce County, the Washington State Patrol and the Department of Transportation to provide public safety VHF radio coverage along the State Route 410 corridor (Greenwater and Crystal Mountain areas). This area can sometimes be a “dead spot” for radio coverage and this work will vastly improve radio coverage for first responders in those rural areas. This project was completed in late 2016. 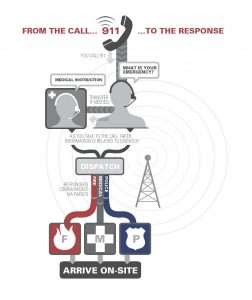 Another radio project, referred to as the VHF overlay project, will provide for mutual aid coverage for both law enforcement and fire. This will allow for improved radio communication between first responders in Pierce County and responders from neighboring counties providing mutual aid incident support. Also included in this project is the updating of fire station alerting and paging systems for fire departments in rural communities.

The commitment to a “single system” remains a top priority for South Sound 911. The single system detailed design review (DDR) began in early 2015; however, it was determined to be a cost-prohibitive, somewhat risky project. Instead, South Sound 911 is pursuing an ISSI (inter subsystem interface) solution to further enhance interoperability and operational efficiencies. This would allow for the use of the “automatic roaming” feature the new radios are capable of providing, essentially making it easier for responders to travel between networks. Dispatchers will also be able to work more efficiently; both radio systems can be operated on a single dispatch console rather than two consoles at each workstation.

Discussions are underway with the radio system owners to create a budget that adequately covers system costs and maintenance, and a 2017 allocation schedule was developed to ensure consistent and fairly-balanced user fees for the agencies South Sound 911 serves. The radio system owners also agreed to jointly coordinate the development of a strategic plan for South Sound 911’s role as the Public Safety Radio System Administrator/Operator by 2019-20.