Implementation of the new computer-aided dispatch (CAD) system was a significant, multi-year, technical undertaking that involved multiple phases, multiple agencies, and many hours of training, with particular attention to system integration. Committees were formed with decision-makers, technical staff, and field and dispatch users, to ensure transitions would be successful.

“Interoperability is a cornerstone of South Sound 911 and why the agency was formed,” South Sound 911 Executive Director Andrew Neiditz said. “It is a significant accomplishment for all public safety agencies to have worked together toward this common goal, which ultimately helps make our communities safer.” As of April 11, 2017, South Sound 911 and all of its police and fire agency partners were using the new CAD system. The system is maintained by a dedicated team within the Communications Systems department.

Now that all local public safety agencies are operating on the new CAD system, collaboration will continue as agencies look to improve operational efficiencies for call handling and dispatch. For the time being, however, fire and medical aid calls will still be transferred to fire dispatchers, as has been the process in Pierce County.

Law enforcement agencies dispatched by the South 35th Street Communications Center migrated to the new Hexagon Safety & Infrastructure (HSI) platform at 5 a.m. on Oct. 13, 2015, followed by the agencies and dispatch staff at the Eastside Communications Center on Oct. 19, 2015. Agencies dispatched by the Fife branch migrated to the new system on Oct. 28, 2015.1

It took time for communications staff and officers in the field to get used to the new system; it was a major change from previous systems.

“This is a huge deal to bring us all together under the same [CAD] system,” Puyallup Police Officer Dan Pashon told KING-5 News. “When we have a critical incident, when we have to get officers from different agencies to respond, we had to exchange that information through telephone calls, through dispatch centers, who will then get that through the radio. Now, we’re all on the same system.”

South Sound 911 continues to work with staff from HSI for system adjustments while dispatch and law enforcement staff provide feedback from real-life use. Staff from HSI were on-site for two weeks providing implementation support and assistance and returned the following month to work on adjustments suggested by users. Additionally, South Sound 911’s own technology staff continually provides support and develops custom enhancements and solutions.

South Sound 911’s Fire Communications Center (formerly West Pierce Fire & Rescue Fire Comm) was the first fire dispatch center to move to the new CAD system at 5 a.m. on Nov. 1, 2016, along with the 18 fire districts they dispatch. This marked the first time both fire and law enforcement responders in Pierce County have been on the same dispatch system.

The time between law and fire dispatch implementations allowed for more hands-on training with fire agency users, as well as dedicated HSI on-site support during the cutover.

Tacoma Fire Communications later transitioned to the new CAD system on April 11, 2017. Tacoma Fire Communications dispatches for the Ruston Fire Department and the Tacoma Fire Department, which also provides fire and EMS for the cities of Fife and Fircrest.
Both fire communications centers and their field users will go through post-implementation processes similar to the law enforcement users. This process allows for user feedback to be collected so the system can be further fine-tuned and enhanced to better meet their needs.

After a series of vendor demonstrations and issuance of a request for proposals (RFP), South Sound 911 selected a CAD system from Hexagon Safety & Infrastructure (formerly Intergraph Corporation). The new CAD system will provide a unified platform for Pierce County’s 160 dispatchers and call takers and over 1,800 law enforcement and fire/EMS first responders.

“Interoperability, information sharing, and standardization are some of the key capabilities we sought to support South Sound 911’s mission and vision,” Executive Director Andrew Neiditz said when the CAD vendor was announced. “This technology will allow us to assign resources from any or all agencies to a single incident, providing better protection for our first responders and safer communities.” 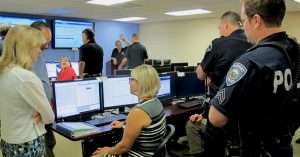 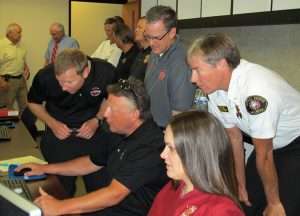 The involvement and collaboration of dispatch and field personnel in the configuration process has been and will continue to be critical to the success of the new regional system. Configuration efforts continued into mid-2015 and intensive training of the nearly 2,000 users of the system spanned several months leading up the to the first go-live in October 2015.

The photos at right show police and fire officials previewing the new CAD system at an open house event on July 7, 2015, at the City of Puyallup / South Sound 911 cooperative training center.