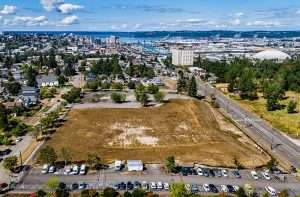 South Sound 911’s public safety communications center (PSCC) will be constructed at 3580 Pacific Ave. in Tacoma, at the site of the former Puget Sound Hospital.

The hospital buildings were demolished in 2017, paving the way for for South Sound 911 to unify, centralize and streamline emergency 911 call taking and dispatch operations in the region.

A foundation for South Sound 911’s facility needs were established in 2013’s facility planning study. It identified site considerations and determined an approximate 5-6 acre parcel would be required. At the regular August meeting that same year, members of the Operations Board recommended the building site be located in the Tacoma metro area.

In early 2014, in conjunction with Pierce County Facilities Management, South Sound 911 staff identified and researched the viability of various properties based on criteria outlined in the Facility Planning Study and the National Emergency Number Association (NENA) PSAP Site Selection Criteria document [see the Site Criteria Summary document for details]. Also considered was the preference expressed by the Operations Board for a location in the Tacoma-metro area. Seven potential parcels were presented to the Policy Board in executive session on June 25, 2014.

After further review and subsequent discussions at the Policy Board level, two sites were selected and announced in November 2014 as the preferred and alternate sites: 2119 Mildred St. W. in Fircrest and 6700 S. Adams St. in Tacoma. Both sites were listed in the request for proposals (RFP) issued to the development teams [RFP 1429].

In June 2015, South Sound 911 announced that it would no longer pursue the purchase of the “preferred” Fircrest site, citing soil issues as a cause for concern. Instead of focusing solely on the “alternate” site, South Sound 911 would resume its search for a suitable site.

That same month, the Operations Board unanimously approved a motion to formally endorse geographic boundaries for the property search. The boundaries were comprised of: Bridgeport Way to the west, North 12th Street to the north, Waller Road to the east, and 112th Street East to the south.

Through the rest of 2015, sites continued to be evaluated. The project team regrouped and began working from an original list of over 30 sites produced after an extensive search that included available real estate, multi-parcel arrangements, and space and land not currently on the market. That list was narrowed to 20 feasible sites after a developer-led preliminary evaluation of usable space, proximity to potential hazards, access to power and utilities, and site integrity. After the application of operational considerations, the list was further narrowed to seven sites.

On March 16th, South Sound 911 announced it reached a tentative agreement with Pierce County to evaluate property at 3602 Pacific Ave. in Tacoma, for the site of the new public safety communications center.

The Pacific Avenue location, occupied by Tacoma-Pierce County Health Department and Pierce County Community Connections, was among those remaining from an original list of over 30 potential sites after an extensive search that included available real estate, multi-parcel agreements, and space and land not currently on the market. 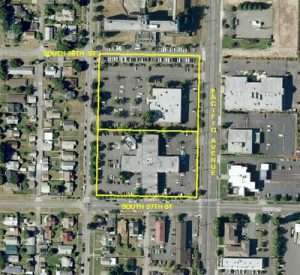 The parcels, one of which included the old Puget Sound Hospital, were evaluated to determine the best use of the overall site. Similar to the Fircrest property under consideration in 2015, the site was larger than the 5-6 acres needed for South Sound 911 facilities.

However, at a joint public meeting on July 27, 2016, South Sound 911 Policy Board and Operations Board members unanimously approved a motion to support the acquisition of a single parcel — 5.34 acres at 3580 Pacific Ave., the site of the old Puget Sound Hospital. The site was deemed to provide the soundest solution. (Other possible options for the originally proposed two parcels called for redrawing parcel boundaries or changing South Sound 911’s operational plans.) 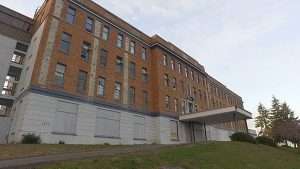 At the same meting, the council also approved Ordinance 2016-82s, amending the Pierce County budget to account for the South Sound 911-fronted funds1 to demolish the old Puget Sound Hospital, once referred to as Puget Sound Behavioral Health Hospital. A spokesperson for Pierce County Facilities Management stated the demolition would be complete by mid-2017.

In response, South Sound 911 Executive Director Andrew Neiditz released a statement supporting the council’s actions and the community’s embracing of the project. 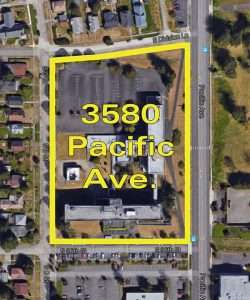 To proceed, the land will be appraised and its cost to South Sound 911 will be the value of the land, minus the cost to demolish the hospital building. Other details and costs will be determined at a later date.

Geo-technical and environmental evaluations of the site’s suitability for construction were completed for a previously proposed county project. South Sound 911 will not need to repeat the due diligence.
“The existing knowledge about the hospital site paves the way for staying on schedule,” Neiditz said. “Pursuing the single parcel is the preferred option, and provides the best value for the community, taxpayers, and South Sound 911.”

The year was primarily dedicated to demolition efforts to prepare the site for South Sound 911’s PSCC.

The demolition project, led by Pierce County Facilities Management, was completed in 2017. 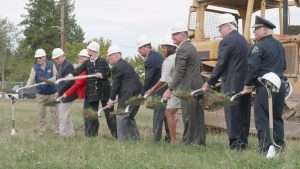 On Sept. 19, 2019, South Sound 911 held a groundbreaking ceremony at the future site of the PSCC. South Sound 911’s Board of Director and Executive Director participated, as well as Tacoma Mayor Victoria Woodards and Pierce County Sheriff Paul Pastor.

1In anticipation of county action regarding the site, South Sound 911’s Policy Board approved a budget amendment at its meeting on Sept. 28, 2016, authorizing the agency to front funds up to $2.6 million for the demolition of the old hospital. Demolition costs are the responsibility of the property owner (Pierce County), so these funds would be loaned to the county so demolition could begin in 2017 to better meet South Sound 911’s project timeline. The fronted funds would then be repaid to South Sound 911 through reduced lease payments over a yet to be determined time frame.

The $2.6 million will come from a reserve fund established for the facility project and will not impact South Sound 911’s operating budget. The board’s action merely made the funds available for the county.